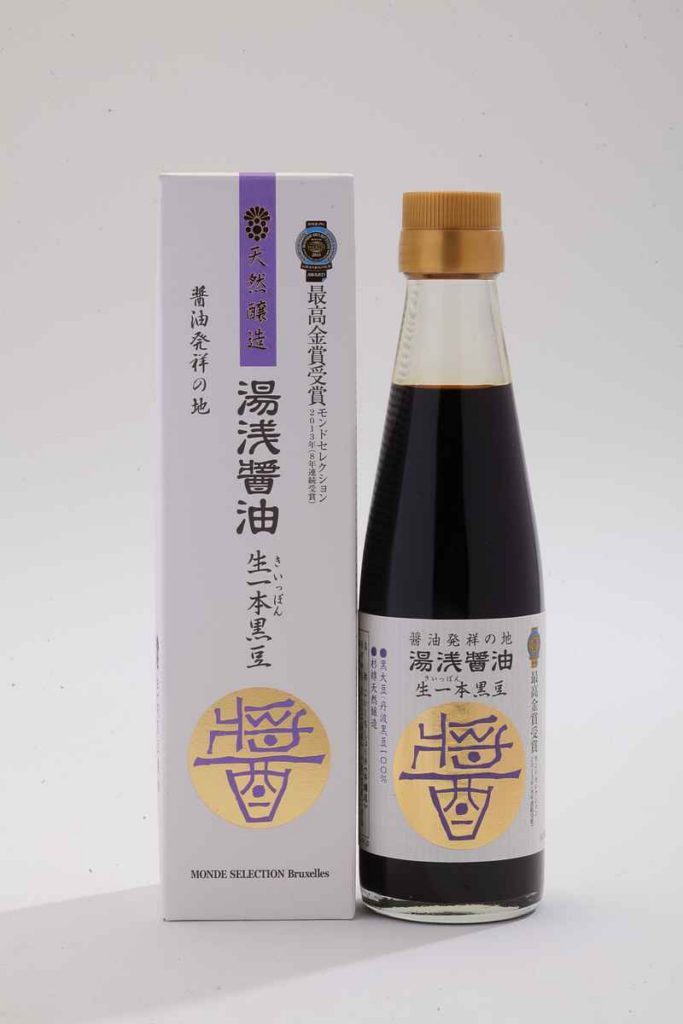 This sauce is made from carefully selected premium black soybeans, and matured in cedar barrels for more than 24 months to create a complex umami and a rich flavor. The sweetness and aroma of black soybeans has a high reputation not only within Japan but also among Michelin-starred European chefs. It has received the Grand Gold Medal at the Monde Selection for 10 consecutive years from 2006. 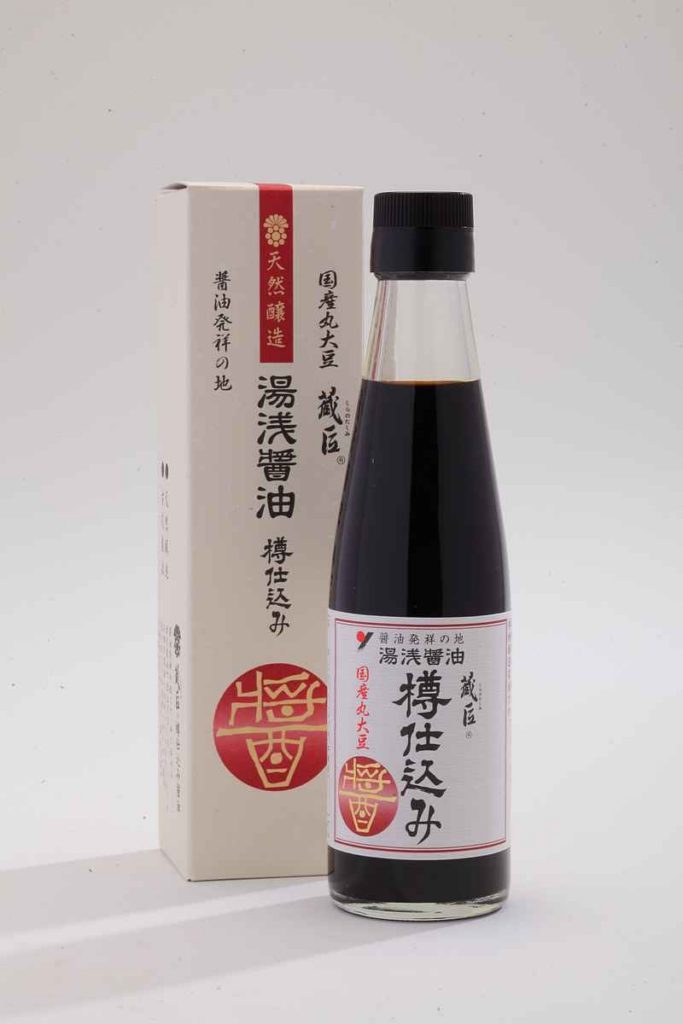 Taru-jikomi -This is Yuasa Soy Sauce!

This sauce is matured in cedar barrels for more than 18 months to bring out complex umami. Its flavor and aroma get excellent feedback from our customers. We use this as the base soy sauce to make other products such as Yuzu Ponzu, Curry Soy Sauce, and others. 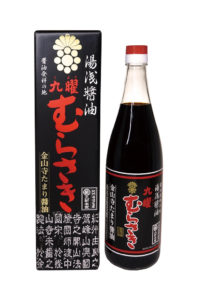 The origin of soy sauce was said that it was liquid found and taken from the fermentation barrels at the process of making Kinzanji-miso. Kinzanji-miso is a traditional food using soy beans, barley, rice, sugar, salt and some vegetables like egg plant, cucumber, ginger and Japanese herb called “shiso” and good to eat with steamed rice and vegetable sticks. We call that kind of liquid is “tamari” which is thick liquid stayed at the top of the barrels and has excellent flavor with vegetable extract. Then afterward, people had tried to make soy sauce efficiently without vegetables and then grown soy sauce business all over Japan from Yuasa.
We are the only one manufacture to make soy sauce using Kinzanji-tamari only taking 3% out of making Kinzanji-miso. Law salt, thick color and deep flavor is popular for sashimi. Grand Gold medal at the MONDE SELECTION consecutively from 2006 to 2014. 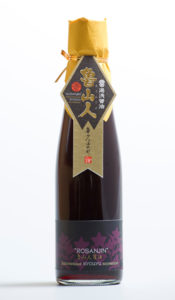 The name of this soy sauce has came from “Rosanjin Kitaohji” who is the most famous gourmet, potter, cook and artist in the Japanese history. His spirit was succeeded to Rosanjin club and that club ordered us to make the highest quality soy sauce. We make soy sauce in the cider barrels with special ingredients which is naturally cultivated in Hokkaido. Soy beans, wheat and rice is all grown naturally without any fertilizer nor pesticide. It is called miracle and evaluated higher level than organic. Rosanjin soy sauce has rich aroma, wonderful taste and good flavor to bring up the pure taste of the materials itself. It is said that it beyond soy sauce! 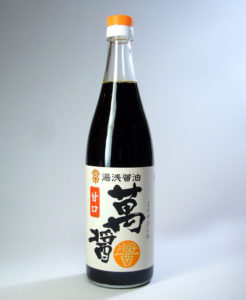 This is sweet soy sauce adding sweet sake and millet sugar into Tarujikomi Soy Sauce. It is good to eat in Sukiyaki, Teriyaki and other cooking. 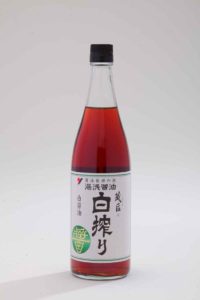 Light color soy sauce without Dashi is very rare even in Japan –less than 1% in whole soy sauce market. Because of that light color, complicated flavor and umami with our special manufacturing methods, it is quite popular especially in EU and the US restaurants instead of using salt. It will give much inspiration and possibility of cooking. It is not for Sashimi nor Sushi, but for cooking. 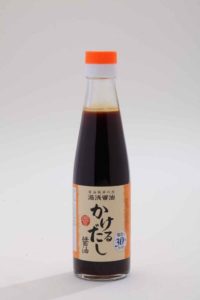 30% saltiness cut. Katsuo, Konbu and chicken extract are added in rich Yuasa Soy Sauce which is 12 to 18 months fermented. It taste deep and rich but not salty with a little bit sweetness. 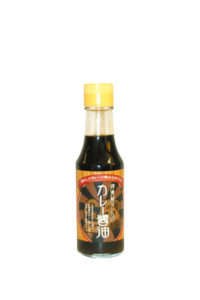 This soy sauce is made as the seasoning for curry rice.
6 kinds of spices are mixed in 2 kinds of Yuasa Soy Sauce to match with curry. It is good to use for fried rice, deep fried shrimp and croquette, too.
It brings deepness and aroma flavor to dishes easily.
It is fun to make salad dressing and sauce for grilled checken. 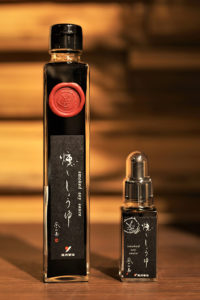 With only one drop, it turns taste and flavor smoke and tasty!
It is fun to use. 15% saltiness.

This soy sauce is made with such a wonderful collaboration between Yuasa Soy Sauce and Mr. Koshimizu who is the smoke specialist and chef of restaurant “Kun” in Akasaka, Tokyo.
It tastes deep and rich with smoke smell. No dashi included but it taste like including Katsuo bonito dashi. It is good to match with cheese, sashimi, meat, egg dish. 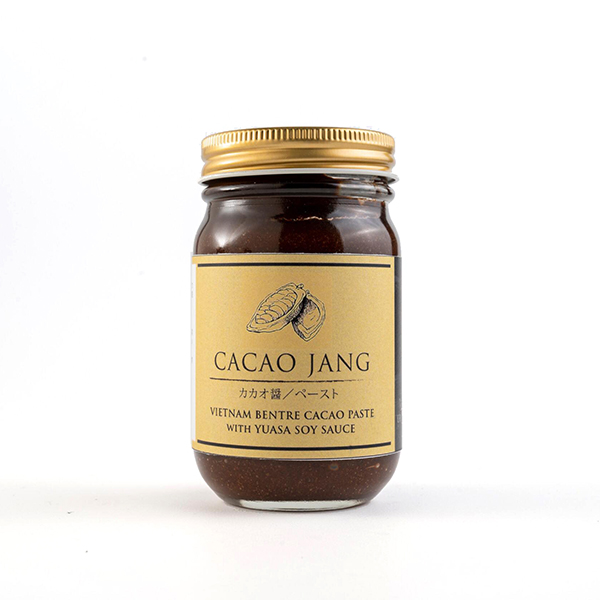 The world's first cacao soy sauce "CACAO JANG" is born!
Newly released in January 2021, cacao jang which is "chocolate flavored soy sauce jang" has emerged as a new seasoning in the cooking world.
Born from the idea that "if the same fermented foods are used, can they be fused to make soy sauce? 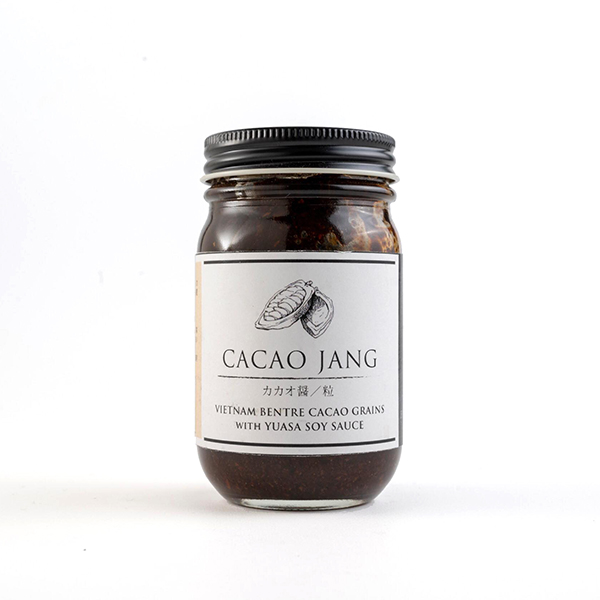 The world's first cacao soy sauce "CACAO JANG" is born!
Newly released in January 2021, cacao jang which is "chocolate flavored soy sauce jang" has emerged as a new seasoning in the cooking world.
Born from the idea that "if the same fermented foods are used, can they be fused to make soy sauce?

Grain type
The crunchy texture of the uneven grains is fun, and the flavor of cacao floats softly in the mouth at the moment of crushing.
it is an accent for the texture and taste!