We can guide you through the factory,or you can explore on your own

To help you get acquainted and learn about traditional soy sauce production factories, our entire self-tour route is included below. Enjoy your virtual tour!

Kuyo-gura is the soy sauce storehouse owned by Yuasa Soy Sauce Ltd. You are able to see the whole process of soy sauce production here.
In this tour, you will learn the history of soy sauce, see Japanese cedar barrels and the filling and pressing equipment, and you will taste our products. You can try stirring the mash with a special paddle, just like a professional, for an extra fee. If you would like to try stirring the mash, please pay at the counter located at the entrance.
The final destination is the souvenir shop “Hishiokan”. Feel free to enjoy your souvenir shopping here.

Eleven Japanese cedar wood barrels are placed in Kuyo-gura, and each barrel is still filled up with Kuyo-gura’s original soy sauce.At Yuasa Soy Sauce Ltd., we produce all of our soy sauce independently. Thanks to the traditional method which does not add water during fermentation, our soy sauce maintains high purity and natural flavor of soy sauce.

At our storehouse, we pay careful attention to the safety of visitors; however, we appreciate your consideration where our staff are working.There are stairs in our storehouse, and the route goes from the order of 1st floor to the 2nd floor, and back to the 1st floor.
Please ask the nearest staff if you need assistance with mobility. You can also enjoy shopping at Hishiokan (8) or rest at café Hishio (9).

The restroom is located at Hishiokan (8), near the entrance/exit. 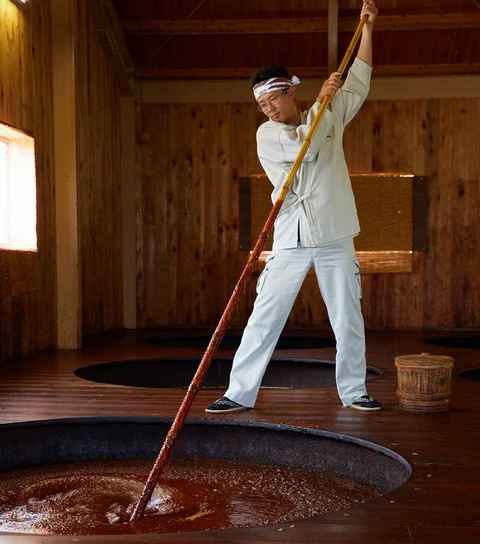 Enjoy observing the entire process of Yuasa Soy Sauce production at Kuyo-gura – a birthplace of Yuasa soy sauce.
After entering the storehouse, the tour is directed as follows: 1st floor→2nd floor→covered passage→1st floor. If you have trouble using stairs, please ask our staff nearby for assistance. You may also wait at Hishiokan (8).

At the front of the soy sauce storehouse, you will first notice cedar barrels containing soy sauce. These barrels are over 100 years of age. Soy sauce is prepared through a 1-2 year fermentation period.

Kishu Yuasa is a birthplace of soy sauce. It has been said that the roots of soy sauce go back to Kamakura era (around 1254). Hottoenmyokushi, the founder of Kokokuji ZenTemple located at Kishu Yura, brought back the manufacturing method of Kinzanji miso (Kaizanji miso) from Kaizanji Temple in an ancient China.

Back then, Yuasa had ample supply of natural and clean water, thus Kinzanji miso production flourished. Soy sauce was produced by refining tamari, which is nutrient-rich liquid naturally created in the process of Kinzanji miso preparation.

Japanese soy sauce barrels are made of Yoshino cedar trees, and some of those trees are 80 to 130 years old. Each barrel contains roughly 6 tons of liquid (33 koku; 1 koku is 180.39 liters), which produces about 3000 1-sho (1.8 liter) bottles. Since few craftsmen remain who can produce these barrels, many soy sauce breweries use enameled tanks today. However, Yuasa Soy Sauce brewery still uses the old-fashioned cedar barrels to manufacture soy sauce. 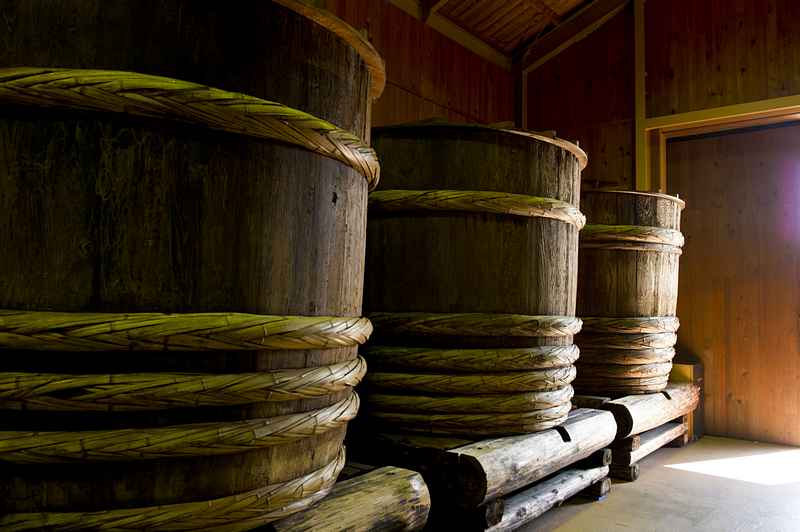 This is where we extract the soy sauce from the moromi, which was fermented in cedar barrels.

Filter cloth is spread inside a wooden frame, and moromi is spread on the cloth, which is then folded shut. This is repeated 300 times to form a neat stack.

The stack’s weight naturally starts to press the soy sauce through the filter cloth. This naturally extracted soy sauce is called Ki-joyu.

We let this process continue for one day. Then we lower the pressure plate to rest on the stack, and wait half a day to one day. Over the next 3-4 days we gradually increase pressure as more soy sauce is extracted.

The purpose of the very slow pressing is to avoid the extraction of cloudiness, which negatively impacts flavor.

After the soy sauce is extracted, it is moved to the wooden barrels you see beyond the pressing machine to age a little more. Then it is filtered and pasteurized. 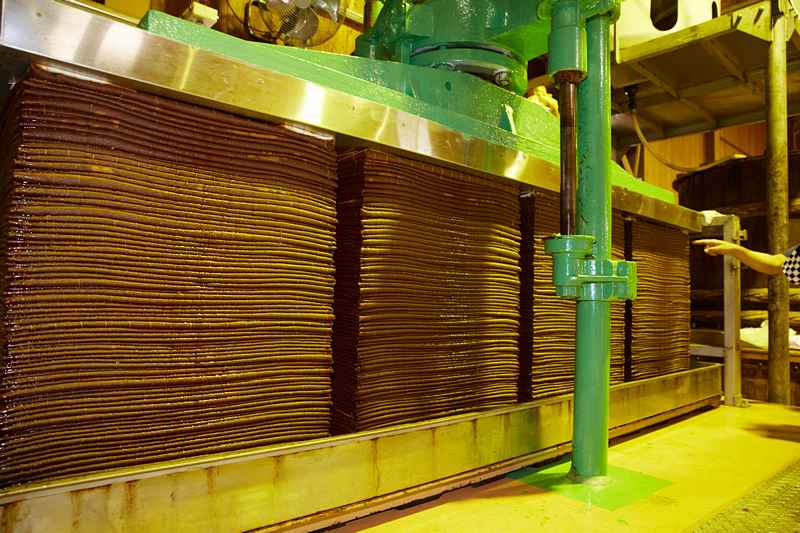 You are looking down on the cedar barrels that you saw on the first floor.

Soy sauce brewing is started by adding Koji mold seed to an equal mix of steamed soybeans and toasted wheat and allowing the mold to grow for a few days. Then this Koji mix is placed in a tank with salt brine to create the Moromi, and it is fermented for approximately 1 to 2 years.

Typically, soybeans are steamed; however, in the traditional method they are boiled slowly and the boil water is used to make the salt brine. In this way, soybean nutrients including isoflavones, lecithin, and saponin are fully extracted.

The preparation of the soy sauce typically starts in winter and follows several steps as follows: letting the mixture mature in the natural cedar barrels for over a year, squeezing Moromi, transferring the raw soy sauce to large wooden vats, and precipitating impurities out of raw soy sauce. At the end, the liquid emerges on the top layer becomes soy sauce. 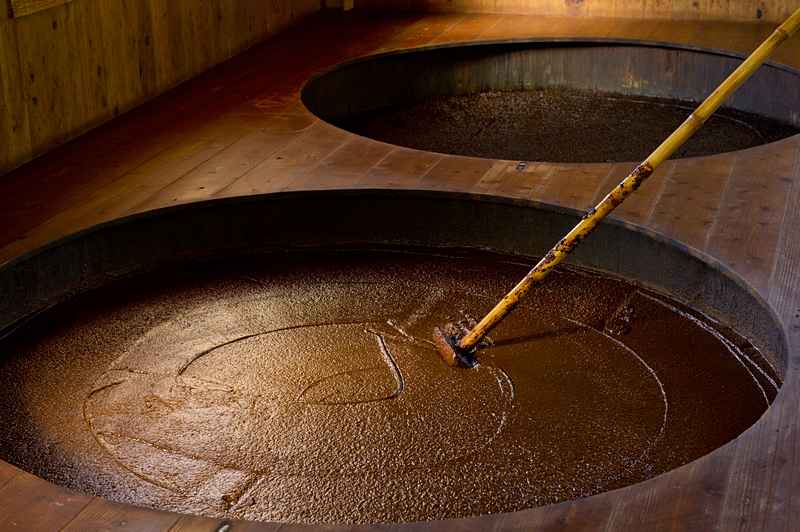 Try stirring the moromi in a cedar barrel, using the traditional paddle!
Please come to the counter near the shop entrance to apply.
You will need to wear a hair net, and wash and sterilize your hands.
We provide traditional clothes so you can take a souvenir photograph.
Stirring: 300 yen
Discount package: Stirring: 100 yen, soft-serve soy sauce ice cream: 300 yen, total: 400 yen

The soy sauce produced in the storehouse is bottled here. The final product is shipped all over the world.

The soy sauce produced at Kuyo-gura goes through pasteurization, then is bottled for shipment. Using special pasteurization equipment, we ensure a safe and high quality soy sauce for our customers.

There is a wide variety of goods in Hishiokan, including Michelin chef-recognized pure black bean soy sauce, the Rosanjin soy sauce, Curry soy sauce, and Kinzanji miso, which is Yuasa’s local specialty.

Sampling is available, so please feel free to try all of our products and explore the varieties in flavor. 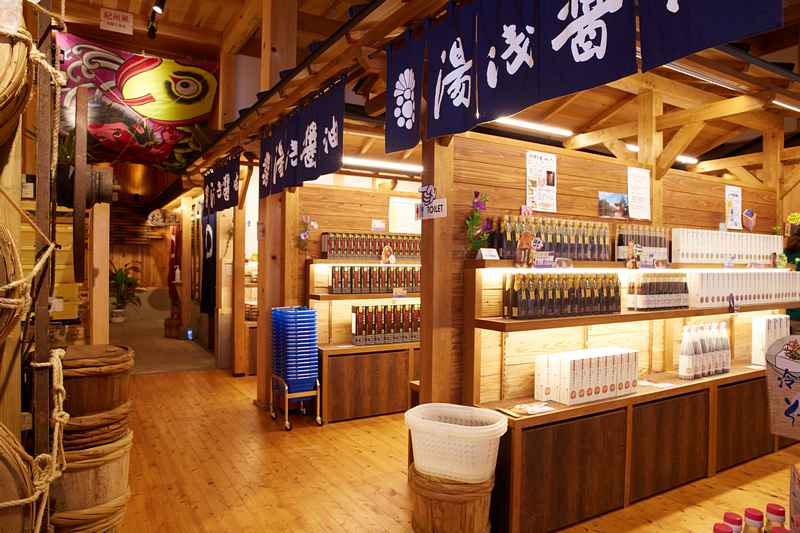 At Café Hishio, please try our one-of-a-kind soy sauce ice cream, which is very popular among visitors. There is soy sauce in the ice cream, but if you enjoy a richer flavor, feel free to put a little more on top of your ice cream.

At the Marushin Honkei shop you can buy Wakayama souvenirs and Kinzanji miso in bulk. There are also other food items, and amazake, a sweet drink made from Koji rice.

Gift-wrapped items can be purchased. Domestic shipping is available. 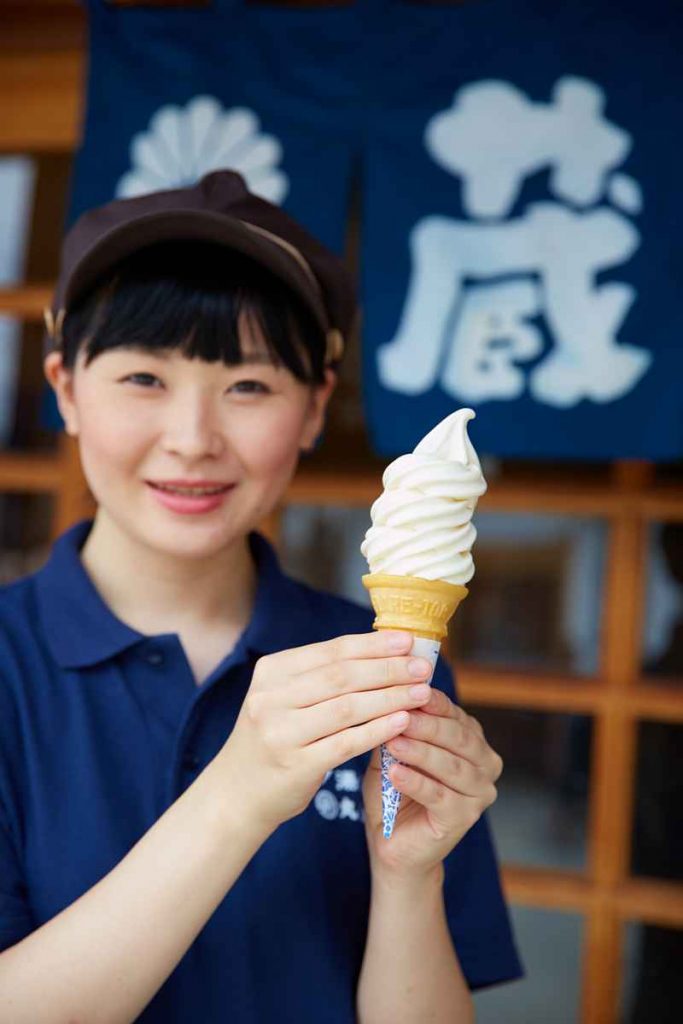